Sooo how was my trip? 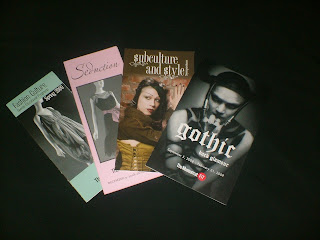 All I have to say is WOW!!!!!...let me tell you something... I am the kind of girl that is almost impossible to impress let alone being satisfied. I admit it takes allot to get a smile out of me, but when you do. You know you did a good job. I was sooooo amazed with the exhibit.
I first saw the Seduction Exhibit. The detail work on each gown was simple inspiring, each gown for each period had a function a purpose. Which too me is fascinating, you see how people lived in those time period and how for the most part made everything into an occasion. I was really happy with the display and learned a great deal....
So leaving the exhibit... I saw two individuals walking out of an exit near by the entrance...and wondered what was going on downstairs...People I have too tell you something about myself..I have never been the curious kind...but that day I was..me and my mentor were wondering what was going on so we decided to take a chance and just go the worst that could happen is just walking into an empty room...right?
Well boy was I happy I was sooo wrong! The most amazing thing happened they were doing a Gothic exhibit called Dark Glamour... I can not stress enough how beautiful it was. Just so decadent, so glamorous and regal.
Afterwards we took a trip to a well known fabric store...wow these people got a stick up their asses...I couldn't stay too long because I couldn't stand to arrogance of the employees...Yes I know they cater too designers and my little pennies wouldn't change one ounce of there prestigious world. But give a f*c%ing break... it's still a fabric store! Or am I wrong. I know, I know I should of expected it!!! but I sometimes forget the snobs of the world, and how easily they can discard the little average ones from their inner sanctum of dumb ass ignorance....let's just say the next time I walk in there it won't be nice...or the next time I walk in there I better have enough money too buy them b*t#ches OUT!!!! But you know what I had a good time looking at their selection of fabrics!!! there was so much variety, especially in the price ranges... there were fabrics that cost 500 dollars a piece. Get THE F&#@ OUT OF HERE!!!! Even if I could afford it..I would tell them YOUR M*THER!!!! Not my black ass even if I won the lotto..NOOO!! the mega millions I wouldn't do anyone that favor! It's clothes not a life saving devise! And even then I would try to bargain!
Then we gracefully left and went to other fabric stores... One I did enjoy was a store that sold trimmings... Oh my goodness!!! It was crazy!! there was not a trimming in the world they did not have!!! and they had ones that glitter and shine!! All kinds of different materials and just endless amount of accessories... I was just blown away.
But the price once again, stopped me from my madness...I can't afford 35 dollars a yard for a stinking trim...they had other's but I wanted a particular one for my project! but I will be back. 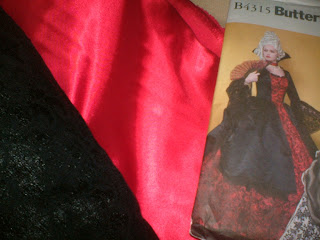 Finally we went into a fabric store and I got my shopping on!!! I brought 7 yards of red satin like fabric and 6 yards of black embroidered fabric. Which came up to 84 dollars not bad! Since I couldn't get the exact fabric that is displayed on the Butterick b4315. I had too think of a way of getting the same effect without driving myself nuts!!!! With the help of the store assistant I was able to get something that was similar too the picture and give it that wow factor.
I think it's the same kind of effect? Don't you? I really like it !!! 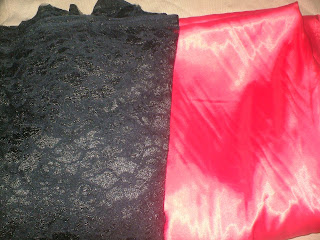 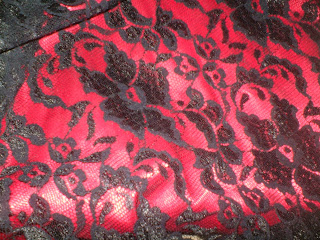 Got some more shopping done. I finally got my Viva La Juicy!!! and I parted ways with my mentor and got back HOME!!!
All in all I had a great time. Next trip The Metropolitan Museum!!! I just can't wait...until then...

(P.S. I wrote most of this post in good humor, so I hope I didn't offend anyone.)
Posted by Ambitious Sewer at 6:21 PM

What a wild ride! I say "screm 'em". In Pretty Woman, I liked that Julia Roberts went back to the clothing store but refused to buy a single item.

I'm so jealous!! At least you enjoyed teh exhibits!

Oh Big fun! That red and black lace is a beautiful combination.

I love it ! Very creative ! That's actually really cool Thanks.

I know this is super old but wondering if you ever completed that one. Considering having it made for me and wondering how it looks without a hoop skirt under it. LOVE the way you got the look of the original fabric. So inventive.