So, how's everyone doing?  I hope you are enjoying the upcoming season.   So far I had been enjoying the last couple of weeks.  Too bad with the drastic change of temperature...the days being 60 degrees and higher to the nights being around 40, made me a little sick.  Yup! (sniffles)
So last month I went shopping. Since I had the time and a gift card that I had yet to use since Christmas.  I figured it was the perfect opportunity to get around and start looking around. I purchased a shirt from the store which at the time was being sold for two dollars....YES!!!!! TWO DOLLARS!!!!  Hey you can never beat a clearance rack.  Well this girl stocked up!  Hell I even bought a Christmas sweater!  You never know!
Well long story short I was excited about my new purchase that I decided to wear it to a family dinner.  Good idea...until I spilled sauce all over it.  I was like DAMN!  I told you it was two dollars.  I couldn't let go...Yeah throw it away.  Nah! not my style, and I certainly wasn't going to fight the stain...it might put a hole in my shirt.
So I thought to myself...what can I do to salvage it? It took a little while but it hit me.  Why not draw on it?  What's the worst that can happen?  So I did. 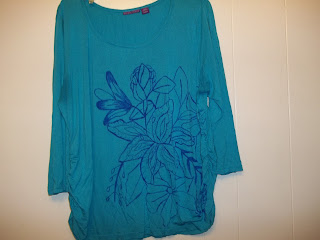 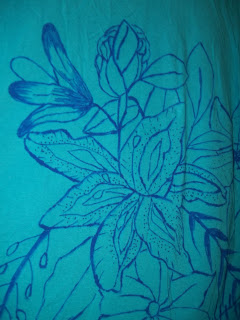 I think it came out pretty good.  And hey it's one of a kind.  So I'm happy with it.

As far as my other projects are concerned.  Everything seems to be coming together.  On my next post I will be talking about my new favorite tool.  Plastic....no, well I mean the carpenters plastic drop cloth.  It's an amazing product especially when creating and altering patterns.  Ah, more on that later.
Well enjoy the rest of your weekend.
Later,
A.S.

Posted by Ambitious Sewer at 6:35 PM

I like your fix for the top. Very clever!

Beautiful drawing! When I first saw the picture I wondered why I never find such beautiful fabric...LOL